by DRUG HONKEY (US) 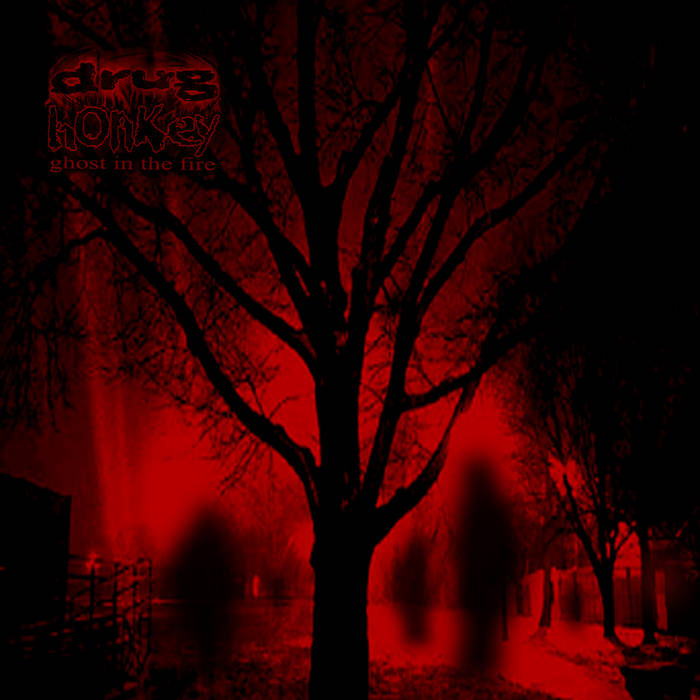 Richard Weems Imagine if Daleks put together a sludge metal band--except maybe that the other Daleks might exterminate them before a recording ever got finished.

Héctor Hurtado Grooscors This is what should sound in your head when your worst fears and anguish stalk you in the middle of a bad trip! Drug Honkey delivers the perfect soundtrack for a hellish trip! Favorite track: Dead Days (Heroin III).

Klem Fandango of the Fandango Citadel

Drug Honkey is a mind-altering drug that has its effect for days. Its hallucinogenic properties create disturbing changes in your thought patterns. Ghost in the Fire is the culmination of various experiments conducted in the sound room. It is a drug that is to be consumed one song at a time, each one exhibiting a different side-effect. From within the pitch black darkness, haunting images are projected from the buried subconscious to the cold inescapable reality. Floating musical apparitions drift seamlessly through periods of undetermined time, plodding suspenseful momentum and shrieking echoes of possessed souls colour this out-of-mind experience blood red.

Official video of Ghost in the Fire - www.youtube.com/watch?v=u1d2HVnDPZM

#9 From The Dust Returned (autothrall)

Some reviews from established zines -


"Drug Honkey has created a masterpiece with this one." - Heavy Hard Metal Mania


"a masterful monolith of suffering and spiritual debilitation." - From the Dust Returned 9/10


"Drug Honkey might be onto a new sub genre of metal." - Teeth of the Divine


"Drug Honkey's own inferno is more organic, it is very human, it wears very tangible wounds, open scars that invite the listener to a chaotic voyage into the human psyche." - Doom-Metal


"Drug Honkey have returned to ruin everything and everyone, only this time around they are far sicker than ever before"- The Sleeping Shaman


"It's droning, dissonant, diabolical, doomed-out psychedelia dripping with LSD and blood; the word "trippy" won't quite suffice for what these guys have done this time around." - Metal Storm 8/10


"for those whom dare to experiment with their musical tastes and want some fresh extreme music, Ghost in the Fire should be an adventurous or a rather mind-bending experience." - Heathen Harvest


"And what they do is manufacture atmosphere — blasted, burned, and black. They suck all the air out of the room and fill the void with a psychoactive fog that’s the stuff of nightmares." - No Clean Singing


"These sludgy beasts all stay under the six-minute mark with a compositional focus that most doom, psych, and sludge bands could take a few cues from." - Maelstrom Webzine


"Between the un-riffs and the dirty, dubby bass blurbles, effected drum loops and ambient samples float eerily atop live drumbeats, adding a certain creepiness to the agony." - Last Rites


"I’ve never done heroin, but to me, that’s what Drug Honkey's fourth album, Ghost in the Fire (Diabolical Conquest) sounds like." - The Obelisk


"I salute Drug Honkey for coming up with maybe the bleakest overall album I've heard...and that's saying something." - Wormwood Chronicles


"There is always something going on in the music that you can’t quite identify, making the music of ‘Drug Honkey’ all the more interesting to listen to." - Subcide Webzine


"I have thought carefully about the mark here and given it such a high one due to the fact that this is so unique and challenging and also as it is very clever at putting you in a place if you are prepared to venture there." - Ave Noctum 8/10

Bandcamp Daily  your guide to the world of Bandcamp